Five lucky Elizabeth College Cadets got the chance to see a Wildcat up close and meet its crew at Guernsey Airport during the Easter break. Thank you to OE Lieutenant Lucas Harrisson (9881) for organising the visit during the short window he was on island to work with the Spirit of Guernsey Lifeboat. Lucas will commence his flight training on Wildcats in August this year. 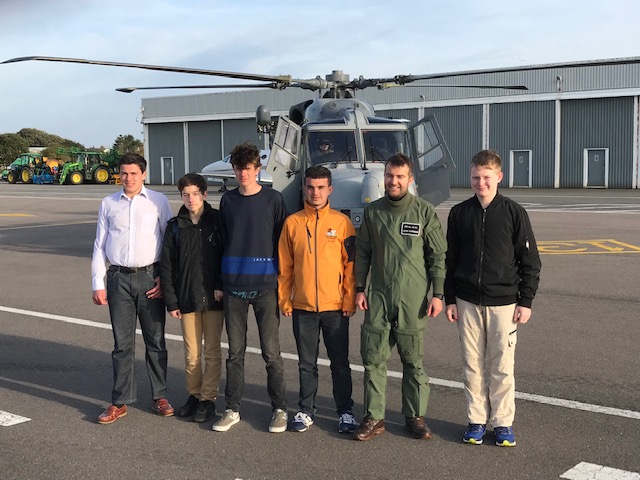 OE James Colmer (8027) was commissioned to do a series of illustrations to reflect Victor Hugo’s life on Guernsey. The project, in collaboration with Visit Guernsey and TPA Creative, is dedicated to Hugo’s exile. Follow the link to view the microsite and see James' work. https://victorhugo.visitguernsey.com/

Dr Mat Dorian (8457) has been appointed as the new Guernsey representative for the British Medical Association. Mat, a partner at Queens Road Medical Practice, will be focussing on the recruitment of GPs and specialists to the island which has obvious differences from the NHS; in addition, it can be a big ask for experienced practitioners with a family to uproot to a small island. Mat also said that Brexit and the potential ramifications on the supply chain plus obtaining professional indemnity insurance can also be an issue. However, Guernsey remains better doctored than the UK will less patients per GP.

We are sad to report the passing of Stanley “Jim” Jehan (4257), a former Jurat and Lieutenant Bailiff, at the age of 95. Jim had a distinguished military career serving in the Light Infantry, and then in REME where he worked in the Armoured Brigade. He was assigned to Operation Overlord and went ashore on Juno, the Canadian beach, working alongside the Canadian Army, spending Christmas in 1944 under bombardment from German forces in Belgium. Following WW2, Jim served in India and then in Palestine before being de-mobbed. In 2016 his service was rewarded with the award of the Legion d’Honneur by the President of France. Bailiff Sir Richard Collas said “I find it extraordinary to think that such a modest and humble man who sat on their benches so recently had seen and lived through such extraordinary experiences as he endured during his military services.”

Alex Le Maitre (10200) has been working hard in the UK to once again climb the GB fencing rankings. Alex, now at University in the UK, has found the pressures of juggling his studies with fencing a challenge; however with renewed focus he is back in the GB top 10 for his age group in sabre, taking silver in Manchester in March and a bronze in the Leon Paul British open Championships. His aim is a top three finish next season. His twin brother James (10199) is also an accomplished fencer; James, now studying at Exeter University, is in the University 1st team and recently won the Master of Arms for best overall competitor in all three weapons in the Devon County Fencing Championships. He has now been asked to represent Devon in upcoming competitions against other counties in the southwest.