Peter Morgan (4749) has recently taken up the post of Commodore of the Royal Cornwall Yacht Club in Falmouth. One of his first duties was to welcome Sir Robin Knox-Johnston ashore in a re-enactment of his record breaking non-stop solo circumnavigation in 1969. Sir Robin talked to Peter about his time with the British India shipping company in the 1950s and 1960s and Peter was delighted to hear he remembered OE John Ross (5028), as a Guernsey man on the training vessel with him and for being a wizard at mathematics. Peter and John shot as the Cadet Pair at Bisley in the mid-fifties.  NetWork OE is delighted to have helped put Peter and John back in touch after all these years. Adrian Fulford (6125) will be appointed as Vice-President of the Court of Appeal (Criminal Division) in October this year. The Rt Hon Lord Justice Adrian Fulford (to use his official title) was called to the bar in 1978 and took silk in 1994. His accolades are many, including being one of the first 18 judges at the International Criminal Court, a Presiding Judge on the South-Eastern Circuit, a Deputy Senior Presiding Judge in the Court of Appeal and Judge in Charge of Reform and Technology. In 2017 he was appointed as the first Investigatory Powers Commissioner.

Andrew Elder (9036) has been appointed as a Client Services Director at IQ-EQ. Mark was previously an associate Director with a top 20 accountancy firm, bringing 18 years experience to the role.

Nick Paluch (9576) and Stuart Leslie (8929) have been appointed Associate Directors of Savills in Guernsey. Both OEs have significant experience in the local property market, and they are looking forward to the challenges and opportunities brought by political and economic uncertainty in the UK.

There are big plans for La Vallette site in St Peter Port. The not-for-profit group “Vive La Vallette” was set up and has submitted a proposal covering two seafront enhancement sites in the area which have been announced as the preferred bid - including redevelopment of the kiosk, regeneration of the bathing pool facilities and a mixed use performance space. The group involves several islanders well know for their community work including Guernsey Community Foundation Chairman Dave Warr (6106), Guernsey Football Manager Steve Sharman (OEA committee member, 7555) and David De La Mare of DLM Architects (8578).

Roger Hughes (7441) has over 25 years experience designing show-jumping courses in Guernsey, the UK and beyond. A hobby rather than a full time endeavour, Roger has designed courses at international level UK meets including Hickstead and the Olympia Horse Show, and recently helped out at an international meet in Portugal. His challenging courses have helped local riders to hold their own at the top UK level.

A fantastic evening of cricket was enjoyed by 40+ OEs at the College Field at the end of May. The weather was spectacular with the newly renovated Cricket Pavilion looking splendid for the occasion. Sadly Guernsey lost to Jersey by a single run, but this did little to dampen the spirits of those OEs present enjoying a BBQ and a couple of cold beers. See the photo gallery on Networtk OE for some pictures of the afternoon.

Congratulations to OE Andrew Ozanne (6069) on his OBE for his services to justice and health care. Andrew is vice-chairman of Victoria Hospital Incorporated since 1984 – a charity to assist the less fortunate with medical expenses. In 2013 he founded CLIP (Creative Learning in Prison) and 2015 he set up ODAS (Offenders Deposit Assistance Scheme). These two charities try to address the largest factors restricting offenders from taking control of their future, namely financial and educational restraints. An architect by profession, Andrew has held more than 20 voluntary positions across a diverse range of charities throughout his adult life. Andrew expressed his surprise at the award and said while he feels undeserving, it has recharged his passion to continue his charitable work. 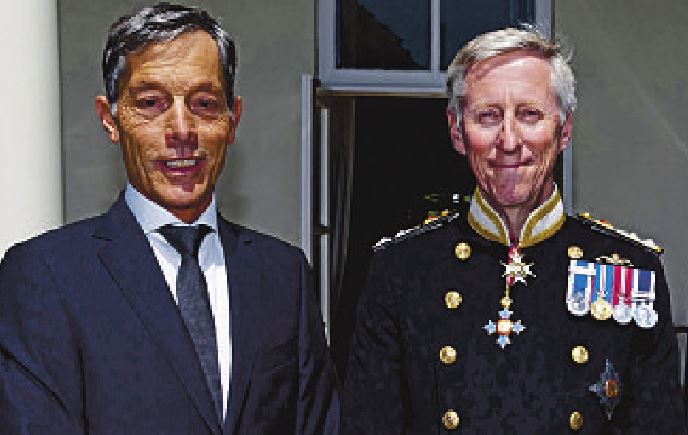