Her Majesty's visit to Elizabeth College in 1957

It is with great sorrow that we learn of the death of Her Majesty The Queen. The reign of Queen Elizabeth II has been a constant throughout most of our lives and we are very grateful for all of her years of dedicated service.

The Elizabeth College community offers its sincere condolences to the Royal Family at this deeply sad time.

OE Bruce Parker said "I was among the guard of honour which welcomed the Queen to Elizabeth College in 1957.  I remember thinking, as a sixteen year old, how beautiful she was as she passed between the ranks of us CCF cadets on parade in front of the College. I have been lucky enough to meet Her Majesty subsequently and on each occasion, in conversation, it was her sense of humour that struck me most."

"I hope this generation of Elizabethans, born out of the first Elizabeth, will remember that it was during the second Elizabeth’s reign, that the College flourished into the wonderful educational establishment that it is today. I was in the junior school when George VI died and Elizabeth became Queen, we all shouted ‘God Save the Queen’ in the College Hall. We must now shout, ‘God Save the King’. 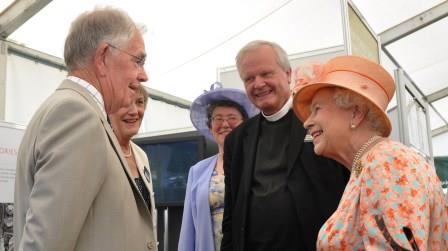